HSPC - Highland Solicitors Property Centre
Find your perfect property in the Highlands & Islands of Scotland
Lochaber covers a large area of the western Highlands, including several islands. The area is rightly famous for its natural beauty, including Ben Nevis, the country's highest mountain, the atmospheric Glen Coe, and the impressive coastlines. The landscape offers numerous opportunities to embrace the outdoor lifestyle, from skiing in the winter to walking and climbing. The largest town in Lochaber is Fort William and there are numerous smaller towns and villages offering a range of property types from your dream cottage in the shadows of the mountains to modern developments closer to the urban areas.

Lochaber encompasses an area of the western Highlands, roughly from Ballachulish north to Invergarry, and west to the coastline, and including the isles of Rum, Eigg, Muck and Canna. The total population of the area is around 20,000 people. The main towns in Lochaber include Fort William (population 10,000), Mallaig (population 800) and Kinlochleven (population 1000). As well as many smaller settlements such as Glencoe Village, Glenfinnan, and Roybridge.

Lochaber is blessed with some of the finest coastal and mountain scenery in Scotland, it is also home to Ben Nevis, Britain’s highest mountain. The area has an excellent variety of outdoor pursuits on offer, including world class downhill mountain biking at Fort William, fantastic hillwalking and climbing on Ben Nevis, long distance walks on the West Highland Way, and opportunities for ski-ing at the resorts in Glen Coe and Nevis Range. Aside from a fantastic range of outdoor sports Lochaber also boasts a variety of historical and cultural attractions that will interest visitors and tourists alike. Examples include the famous Jacobite Steam Train in Fort William, Neptune’s Staircase at Banavie, and Ardnamurchan Distillery to name but a few. 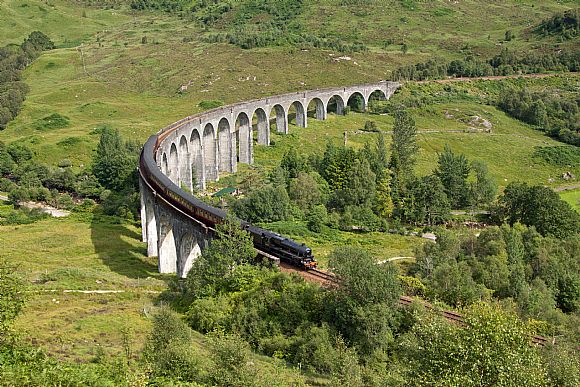 Lochaber has played an important part in some of the most memorable chapters in Scottish history, it was here at Glenfinnan that the famous Jacobite rising of 1745 began when Bonnie Prince Charlie raised his standard on the shores of Loch Shiel (commemorated by the Glenfinnan Monument). Lochaber is also home to Glen Coe, site of the infamous massacre where members of Clan MacDonald were murdered by guests who had accepted their hospitality. As with much of the Highlands and Islands, Lochaber was substantially impacted by the clearances of the 19th century.