HSPC - Highland Solicitors Property Centre
Find your perfect property in the Highlands & Islands of Scotland
Nairn District includes the lovely seaside town of Nairn, well known for its attractive beaches and impressive Victorian era buildings, and the surrounding rural areas. Nairn is a bustling town with a busy High Street and selection of pubs and restaurants, it is also a cultural centre with a popular annual Book and Art Festival.

The area is served with good transport links. Inverness is around 25 minutes drive (via the A96). Glasgow and Edinburgh are just over 3 hours away (via the A9), while Aberdeen is around 2 hours drive (via the A96). Nairn District is served by the Inverness Airport at Dalcross, around 15 minutes drive from Nairn. The airport provides international and UK flights. There is also a train station at Nairn with a rail line that runs east to Aberdeen and west to Inverness.

Nairn is a bustling town with a wide variety of attractions that appeal to both visitors and locals, particularly in the fields of arts and culture. The town hosts a yearly Book and Arts Festival in August and September which attracts speakers and performers from around the world. The area also boasts a number of excellent pubs and restaurants and award winning beaches.

From the mid 19th century Nairn became a popular resort and holiday town and many of its impressive buildings date from this period. Charlie Chaplin used to holiday regularly in Nairn and it remains a popular tourist destination today. It is also one of the driest locations in Scotland due to the shelter of surrounding mountains. 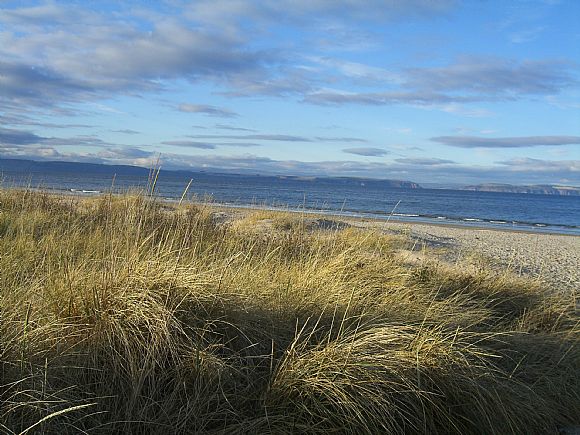